Today was another very long haul.  What I learned:

You can get ready in a hurry.  We woke up around 6AM, looked at the weather, and saw a line of storms headed our way.  It was a mad dash to hookup and get out before getting drenched. 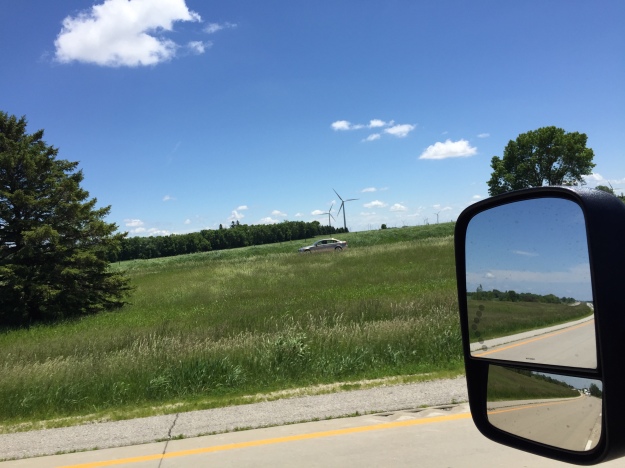 Us easterners don’t see too many windmill farms.  We went crazy!  There were windmills everywhere!  And as far as the eye could see.  We rolled down the windows and took at least 50 pictures.  To the left.  To the right.  In front of you.  Across the horizon.  Minnesota loves its windmills.  And that was just the first farm we saw.  You could tell we were from out of town.

Minnesota may love their windmills, but they hate their roads.  At first it was pleasant, then it got hellish.  I’d have to rank them down in the pits with Ohio.  I would have loved to pay a toll to clean that mess up.

There is some beautiful country out there.  First, Wisconsin.  If you imagine Wisconsin as the stereotypical rolling green hills with red barns, well you are right.  I told Jennifer that I hate the fact that a few years from now my mind will forget what I’m looking at.  Then we were into Minnesota.  More beauty.  Especially when you cross the Mississippi River and climb up out onto its plains.  More rolling hills and country.  South Dakota was a surprise.  Yes it’s flat.  But nothing I’ve seen is just straight flat.  Everything has a little bit of up and down to it.  But after you cross the Missouri River it completely changes.  You would think you were in Ireland with all of this short stumpy hills surrounding you, green with grass.

Its not a good thing when your GPS alerts you to tornado warnings.  Tornado?  The sky is blue?  What in the world could it be talking about.  But one look at our weather app and we knew we were in for some rough stuff.  We tried to outrun it, but to no avail.  Ended up pulling over for a bit.  Then pushed through to Mitchell, SD.  Which brings me to the next thing I learned. 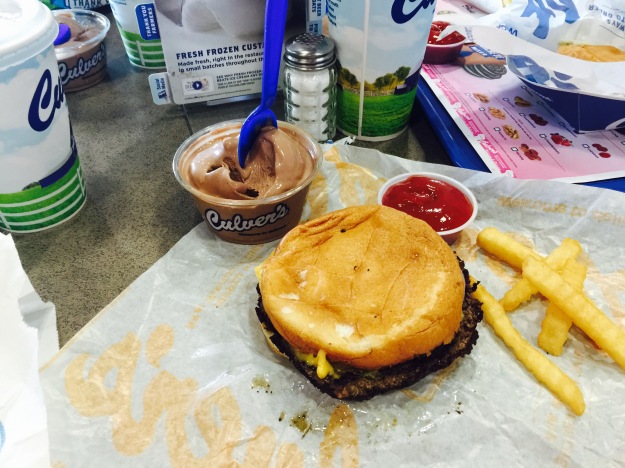 We miss Culver’s!  In Texas, Jennifer and I learned about this Wisconsin restaurant called Culver’s.  It is the home of the ButterBurger.  Yes, of course it is completely healthy.  And they have AMAZING custard – maybe my favorite.

Wind is a drag.  Literally.  I learned over spring break from my Step-dad that by slowing from 70 to 65, I will cut down on drag and gain some fuel mileage.  That tip got me from 9.5 mpg to 11.5.  Not too shabby.  I also didn’t force myself to keep speed going up hills and let the truck do what it needed to.  So far I’ve been pulling 11.5ish mpg’s.  Today, not so much.  A 15 mile per hour headwind was the equivalent of going 80 all day.  At one point while trying to outrun the storm, I looked down at had 8.8.  BLAH!  Can’t wait to see the number when I’m heading back east!  I felt all day that we would top the hill and see the birthplace of all wind.

You can watch Lifepoint anywhere!  We caught our Sunday service this morning somewhere around the Illinois and Minnesota border!